This weekend my husband, Sean organized a 3-gun class that he recommended I participate in. I just got my Breda B12i shotgun, and I’ve been slowly learning how to load it. I had no idea what I was getting into. I had no idea the class was the full days of constant shooting. I’m so glad Sean casually invited me to participate.

Here’s how it went down…

Keith spent the first day covering 3-gun fundamentals. Everything from pistol grip and stance, to shotgun loading. He covered every small detail, but in a very short period of time. There were 12 people in the class, but everyone felt like they were the only one. Keith has a unique way of teaching in that way.

The second day, we spent time combining all of the small parts we had covered the day before. We actually started recording baseline times with a shot timer so we would know where we stand and we would be able to track improvement.

The third day we were given a set if drills that combined all of the small pieces we’d learned the two previous days. Keith gave us this special list of dry fire drills to do every day in order to achieve proficiency in all areas critical to a winning 3-gun performance.

I’m so grateful I took the class…

Just like my decision to separate my gear from my husband’s gear and make this sport my own, I now have my own routine. Not that I don’t want Sean to help me (when I ask for it), but it is vital to my own development as a shooter (especially as a female shooter) that I have my own set of tools, and my own approach to training for my own game.

I also learned how capable I am. The three days were miserable (as far as weather goes), but I didn’t want to be “the girl” who had to go inside because she was cold. I stuck it out. I stayed the whole time. I learned what I was made of! 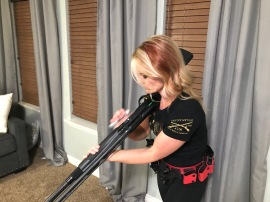